Much to the chagrin of my life insurance beneficiaries, I survived my weekend trompsing up, down, and all around Linville Gorge Wilderness.

Dont be so surprised. I've done this same loop about 5 times now and aside from a few near fatalities I am 99.9% intact.

In summation it was a fine hike. Having some company in the form of Beatty trail coordinator and tick magnet extraordinaire David G was a nice addition to a hike that I usually do solo.

If you recall The Plan... We were attempting to do the ITAYG (Is That All Ya Got!) loop of 22 miles as a single night adventure. It might have seemed like we were biting off more than we can chew. Thats usually awesome when pimento cheese is involved...with Gorge miles not so much.

22 miles is not that big of an overnighter...usually. I've been known to hammer out 15-18 miles in a single day solo. However, those were not hikes in "The Big Ditch". Its common knowledge amongst Gorge Rats such as myself that one Gorge mile is equal to approximately 2-3 miles anywhere else. The trail is narrow, rough, rocky, often hidden by dense foliage, and will test you mentally and physically.

The Gorge is where ankles go to die...

However, once we made it up to the cool breezes and foresty aroma of "The Big Ditch", and after spending a night in Momma Natures bountiful bosom, we were more than willing to give it what for!

I will spare you the mundane details of getting "misplaced" for half an hour, nearly being attacked by carnivorous whip-poor-wills, and David G coming to terms with his own mortality on Leadmine/MST connector. What I will bore you with is photographic evidence of our ITAYG experience in order of occurrence. 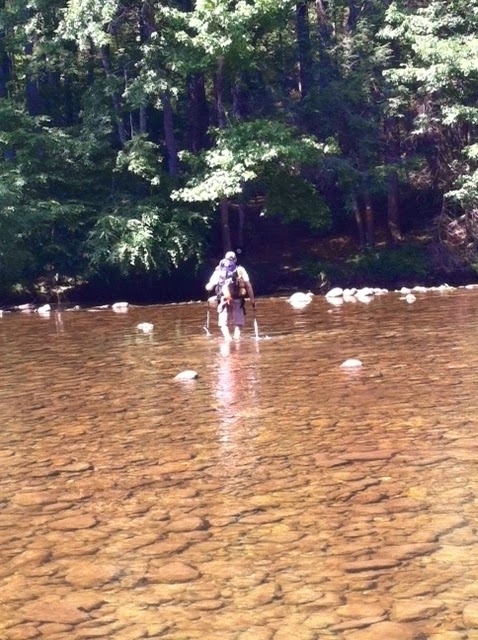 When it was all said and done it was a grand hike...

Now I'm off to check myself for ticks again, then again...then again.