In an attempt to avoid dragging this out for the rest of the week here is the rest of my weekends activities....

Summed up nicely for your convenience. Cause we both know that you should be working, not corning off on the computer while having your actual work minimized on your task bar just in case your boss walks by and you can pull it up really quick... He already knows your slacking off anyway...


After frolicking in the forest Friday afternoon with The Bear, I had to find some human companionship, preferably whilst riding bike-cycles in the forest. It just so happens that fellow flat-lander/former Pineville, NC resident/Tarheel TrailBlazer/Bike-cycle enthusiast, JR had recently relocated his family to Etowah, NC.

JR and I had been planning a ride for quite a while now and it just never seemed to work out. I had work, he wouldn't, I'd be off and he would have something or other going on and so on and so forth. Well Saturday was the day we ride!!

I was happy to oblige him and we made plans to meet at the Davidson River Fish Hatchery in Pisgah Forest. This hatchery is known far and ride as "ground zero" for rad bike fun. Its also home to a shit load of fish preparing to be feasted upon by herons and wealthy day trippers from Charlotte. Im not a big fan of "hatchery fish". I prefer casting my line for some wild trout...but I digress...

I met up with JR about noon on Saturday and his buddy Sir Bikes Alot had come along as well. Both claimed to be "out of shape" which is every bike riders code for "I've been eating too many pimento cheese sandwiches and watching PinkBike videos instead of riding."

We headed up FR 475B and toward the Cove Creek Trail. JR didnt want to hammer, due to his "out of shape"ness but we kept a fun pace up the gravel road. We made it to the secret spur trail to Cove and I told the guys to watch out for trees and what not and we took off down trail.


It always takes a minute or two to get my "Pisgah Legs" going and pretty soon I was dropping and jumping the many large rocks and roots, increasing speed as I went. JR must have been feeling the new bike because he wasn't too far behind and this wasn't easy trail.

At the bottom we kept going up and over creeks, rocks, roots, and forest fun along the mostly flat and flowy section of Cove. At the bridge crossing, I told the fellas we'd be riding Daniels Ridge too and we cut through the woods to an old abandoned road and started the long climb to the top of Daniels Ridge. This is where the group got a little strung out. JR was spinning out, SBA was rolling with me and I tried to keep a fast pace as we went. Pretty soon we met at the top and dropped our seats and hauled tail down to Daniels Ridge.

This is where the ride gets really interesting.

Daniels ridge isnt too steep but its plenty rocky and if you know the trail, you can launch off nearly every rock and root to make the trail your playground. If you don't know the trail well, you end up in the creek 40 feet down the mountain.

Luckily no one hit the creek.

It was great fun and we all survived. SBA and myself wanted to keep going so we peer pressured a very tired JR into doing Long Branch and the Davidson River Trail.

Long Branch requires gravel and trail climbing but your rewarded with a pretty fun decent through very tight laurel and rhodo tunnels. FUN!

We ripped down Long Branch and hit the DRT back to the Hatchery. Ride complete and beers were consumed.

Hopefully I didn't turn JR off from riding totally because he can rip when hes got his legs under him. Im pretty sure the new bike and this ride has ignited the stoke within him to ride again...and soon.


Burton and the Charlotte folks were heading up to do another ride but adding a Davidson River tube float at the end. I of course couldnt miss an opportunity to ride, float on pink intertubes while consuming beers, AND hanging out with some fellas I hadn't seen in a month or two.

I called up BillyGoat Erik and Fletcher to see if they would like to come along. They would.

We met at the N. Mills River Ingles and convoyed up to the bottom the Laurel Mountain. The plan was to do Laurel to Pilot Rock. Pilot is one of the best technical descents in the woods. Fast, rocky, steep as hell, and toss in a dozen or so nasty switchbacks that try to put you over the bars. Awesome bike-cycle fun.

So about 8 of us headed up Laurel Mountain. The climb is about 7 miles but its mellow and has plenty of chunky rock sections to keep it interesting. A few of the fellas hadn't been on a Pisgah ride in a while so by the time we traversed the really tough hike-a-bike section and made it to the top of Pilot they were spent. 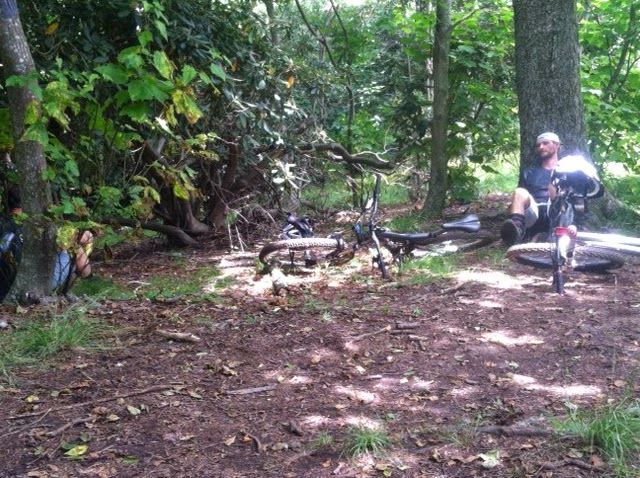 After resting and hydrating for the radness to come, we pedaled up to the top of the hill, dropped our seats, and commenced to rip...

but not before Fletcher regaled us with a story about the time BillyGoat Erik and himself climbed UP Pilot, in the rain, during PMBAR a few years prior. Outside of PMBAR this behavior is not advised...


Down we went over super techy rock sections, off camber switchbacks, and exposed cliff faces.Several folks were claimed by the switchbacks and went OTB or some variation of it. Pretty soon we all made it to one of the best parts of the Laurel/Pilot ride... Awesome views...

We made the bottom and climbed up the gravel back to the trucks. Beers were had and a decision was made to "get beers and get the hell in the river".

It was a great weekend and a well deserved one I might add. After working 12 straight days I was shot physically and mentally. The weekend was meant to be used resting and relaxing. Was it?

Im more tired than when I started but in the best possible way...

Cant wait to do it again this weekend...

See ya then folks!