To most of us working stiffs, Mondays are synonomous with awfulness. Why is that?

Well I'm sure it has mostly to do with the fact that we go "back to work" on Mondays. Also, Its like a big let down after spending a couple days off from having a good time with good friends. You spend all week working hard, preparing for the awesomeness that is to come Friday afternoon and then WHAM!...

You suddenly find yourself back to reality on a Monday morning. Well...

Im going to try to change that and I suggest you follow suit.

Lets not get a case of the Mondays... Lets get a case of the radness because no one ever said that Monday has to suck. We just allow it suck by default of having nothing awesome planned. My Monday afternoon will consist of getting a cold beer, lacing up my hiking shoes, and going outside with The Bear and The Goose to see what trouble we can stir up on some trail somewhere.

Im challenging each and every one of you folks reading this come up with his or her own activity to turn Monday into Funday....

Lets  see what ya got folks.


Moving along to my usual business...

FW and I had made plans to try to find Douglas Falls located in the Big Ivy/Coleman Boundary area of Pisgah. We had attempted this before but failed due to my lack of being able to judge trail distances on a map. This may or may not have had something to due with large quantities of hoppy beverages before starting the hike... but that's neither here nor there

Well this time was different.

Clear headed (mostly) and strong in spirit, we set forth to claim what was rightfully ours!

We started from Craggy Gardens picnic area off of the Blue Ridge Parkway. It was nice leaving Greenview Manor in the low 90's and arriving at Craggy in the upper 60's. This place is starting to become our own personal mountain oasis in the sky. At close to, and even over 6000' in elevation, The Craggies are a high altitude paradise from the city heat down below.

This time I knew for certain where we were going so we set off on the MST to connect to the Douglas Falls Trail. The MST is nice due to its heavy use. Its well maintained and easy to follow thanks to the many volunteers and friendly white circle blazes on trees and rocks every so often.

The hiking was beautiful and many of the forests wildflowers were in full summer bloom.


We met up with a young girl on vacation from her internship at Duke University. This was great for FW who used to reside in Durham, NC home to Duke. Bull City representin'!

They chatted about the Dirty D and I was happy to let The Goose pull me down trail. For 77 years old (11 in people years), The Goose is a hiking machine.

Pretty soon we reached the intersection with the Douglas Falls Trail and our Bull City companion decided to head back so FW and I proceeded down trail to our destiny... 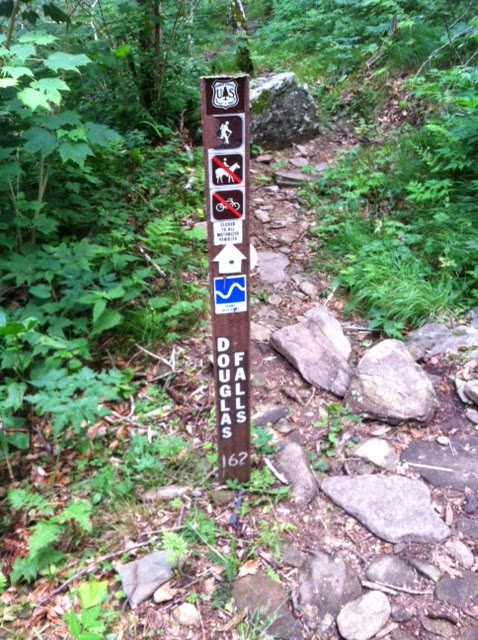 According to the map we had two creeks to cross and then we should be at the falls. The MST is notorious for being somewhat misleading on distances and this was no exception. We crossed at least 4 creeks (none of which were on the map) and FW was beginning to get a bit frustrated.

Creek after creek and no clue how far we had to travel to the falls.

The hike itself wasnt no cake walk either, although if it was at least we'd have cake and thats alright by me. After several thousand feet of knee busting descending we started to hear a creek. A large creek. The kind of creek that could have a badass waterfall on it. Pretty soon we could start seeing water and hearing a large roar of water...the kind of sound that only a 75' waterfall can make.

Finally we made it. After planning on a 2-3 mile hike and ending up with a 5-6 mile hike, one way, we found the elusive Douglas Falls. 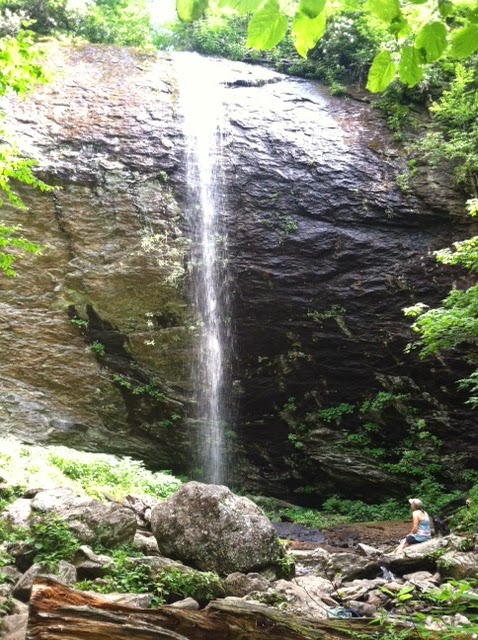 What a freaking beautiful freaking waterfall!!

The best part was no one was there. It felt like we were in the middle of nowhere and had the whole place to ourselves. It was supreme. The coolest part for me was there was not a stitch of trash or human sign anywhere. This is exceptionally rare in these mountains, especially around places that are picturesque...like this.

FW and I sat there contemplating the mysteries of the Universe and communing with nature in splendid solitude for quite a while. Meanwhile The Bear amused herself with a yummy stick...

After spending a while in quiet reflection, FW got a few glamour shots and off we went...back up the mountain with a renewed sense of self-worth and perspective that only being alone in Momma Natures bounty can give. 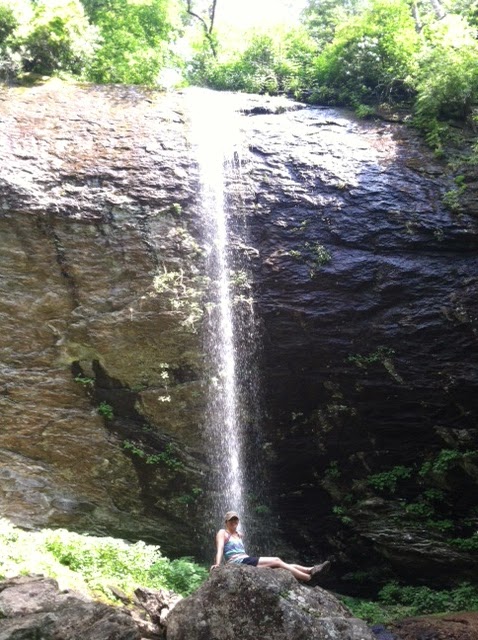 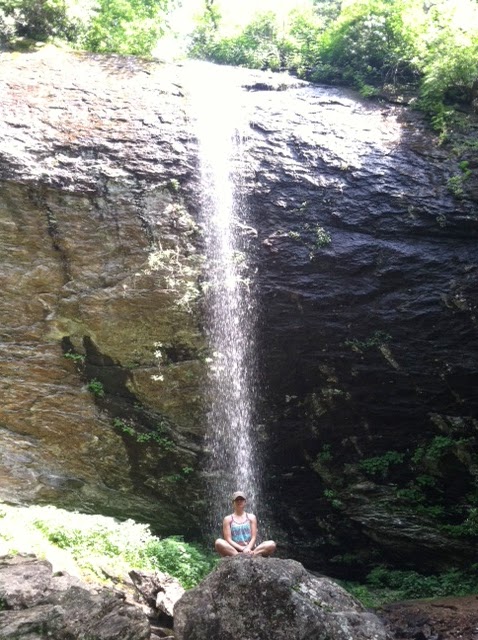 The hike up was much more enjoyable. A combination of achieving our goal and the terrain being easier on the ole knees, had us making good time up the mountain. Shortly toward the top, The Goose began to lag behind. We stopped and took a rest and knew immediately something was wrong. After all the hiking and jumping up and over rocks and creeks she was done.... This Goose was cooked...

For a 77 (dog years) year old dog, she had done outstanding but a hike of this scale was just too much. We took a long rest and let her recover some but she still was dragging. FW and I both knew something had to be done. FW being the animal lover and wonderful dog owner she is scooped her up and gave The Goose a birds eye view of the trail all the way back to the car. 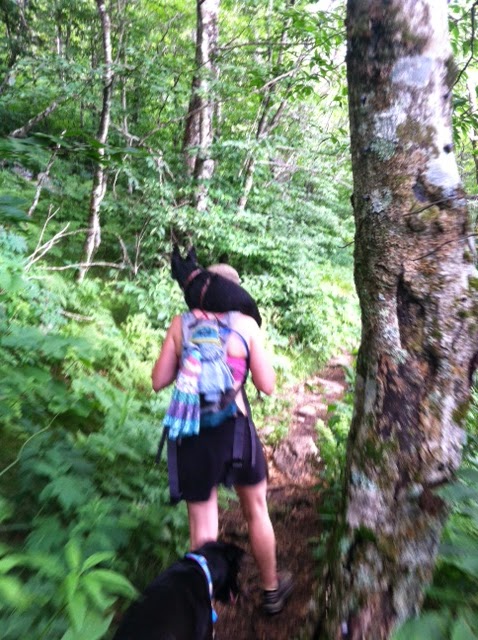 This hike was more than either of us expected but it was soooo worth it finding such a treasure and getting to hang out in the forest for a day with each other.

Thats what its all about. Family Forest Fun...