"Smokey and the Bandit" is the greatest movie ever.

Smokey and the Bandit is the greatest movie of all time. This my friends is an unquestionable truth. Very similar to gravity, sunrises, and Pabst Blue Ribbon. It is ageless, timeless, and will be there forever after you and I are long gone....

If you recall it snowed, depending on your locale, last Wednesday night. AVLUSA received a healthy five inches or so and K.A.W was called out from work due to Nordic conditions. But yours truly wasn't so lucky. Word came in from work that they would be open and so I set off through the frozen wasteland of Asheville, NC. Only a few of us hearty folks were there, mostly thanks to four-wheel drive.. I was cool with having to work because that night K.A.W and I had plans to attend some psychedelic bluegrass jam/hippie music courtesy of "The Larry Keel Experience w/ Dangermuffin" at the Asheville Music Hall. The prospect of having to go in on Friday and miss the show seemed dismal. As Hank Jr. spoke so eloquently "I got a shotgun, rifle, and a four-wheel drive and a country boy can survive" and if it weren't for that 4x4 I wouldn't have made it. Good for it too because the show was awesome and Larry and Dangermuffin rocked the house. 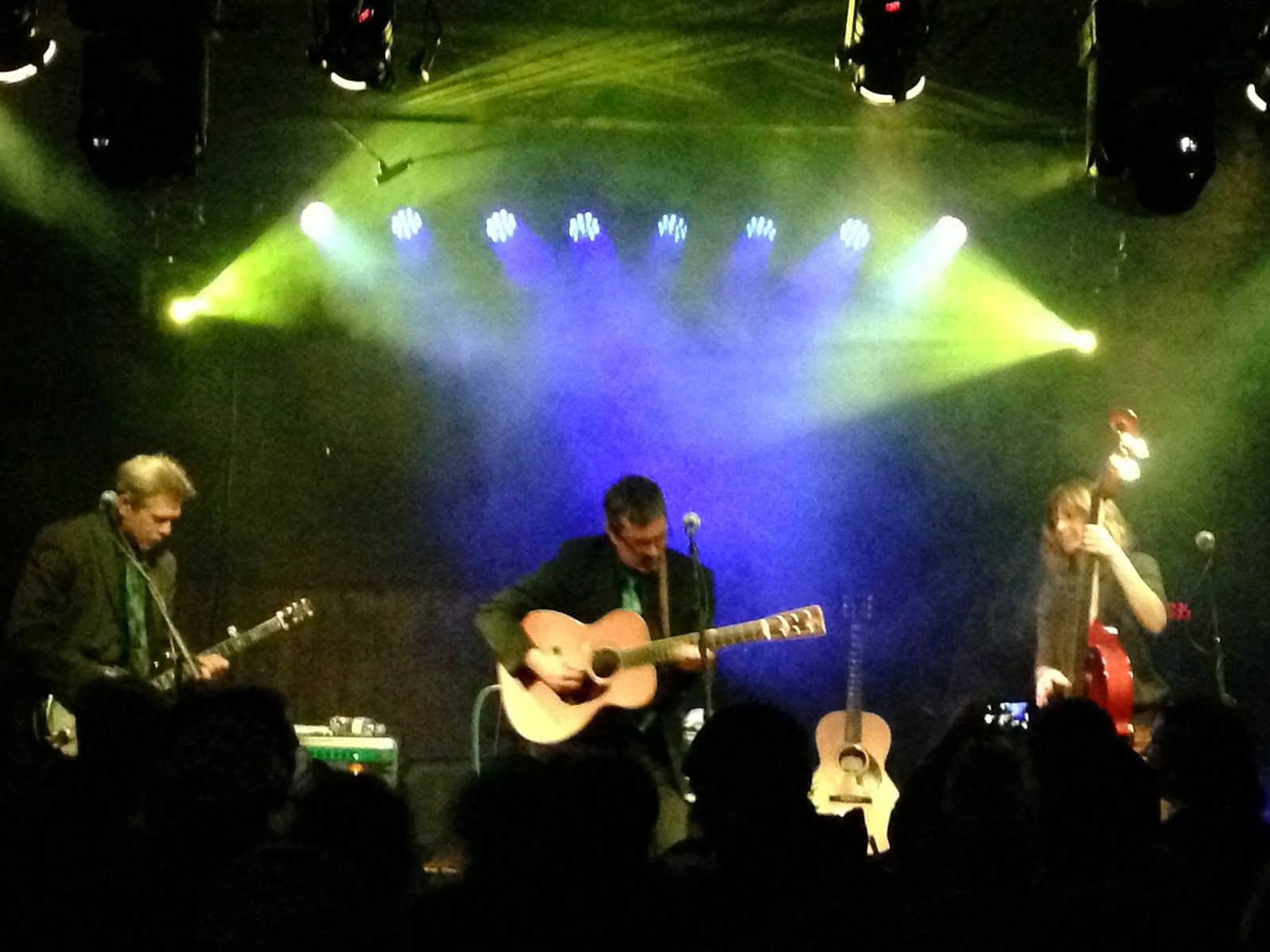 If you not a fan of "The Larry Keel Experience" I suggest you get right and tune in.

K.A.W went in late and I was left flying solo. Too cold to ride and too cold to fish I cleaned up a bit and waited for her to come home from work. K.A.W was due for some snowventures, and so was I since having to work Thursday. We loaded up some packs and took off for a little secret spot right down the way from Greenview Manor. Once in the forest I suggested that we follow some recently roughed in trail and see where the green tape led us. We climbed an old logging cut and slowly gained the ridge. We followed the flagging for quite a while not really sure where it led us,

After being a little "confused" for a bit we spit out of the forest and onto a forest road back to the truck. Exploring some new forest is always and interesting experience. Doing it in 30° snow is a whole other trip. I'm learning quickly that the best way to start the weekend is getting outside, no doubt. 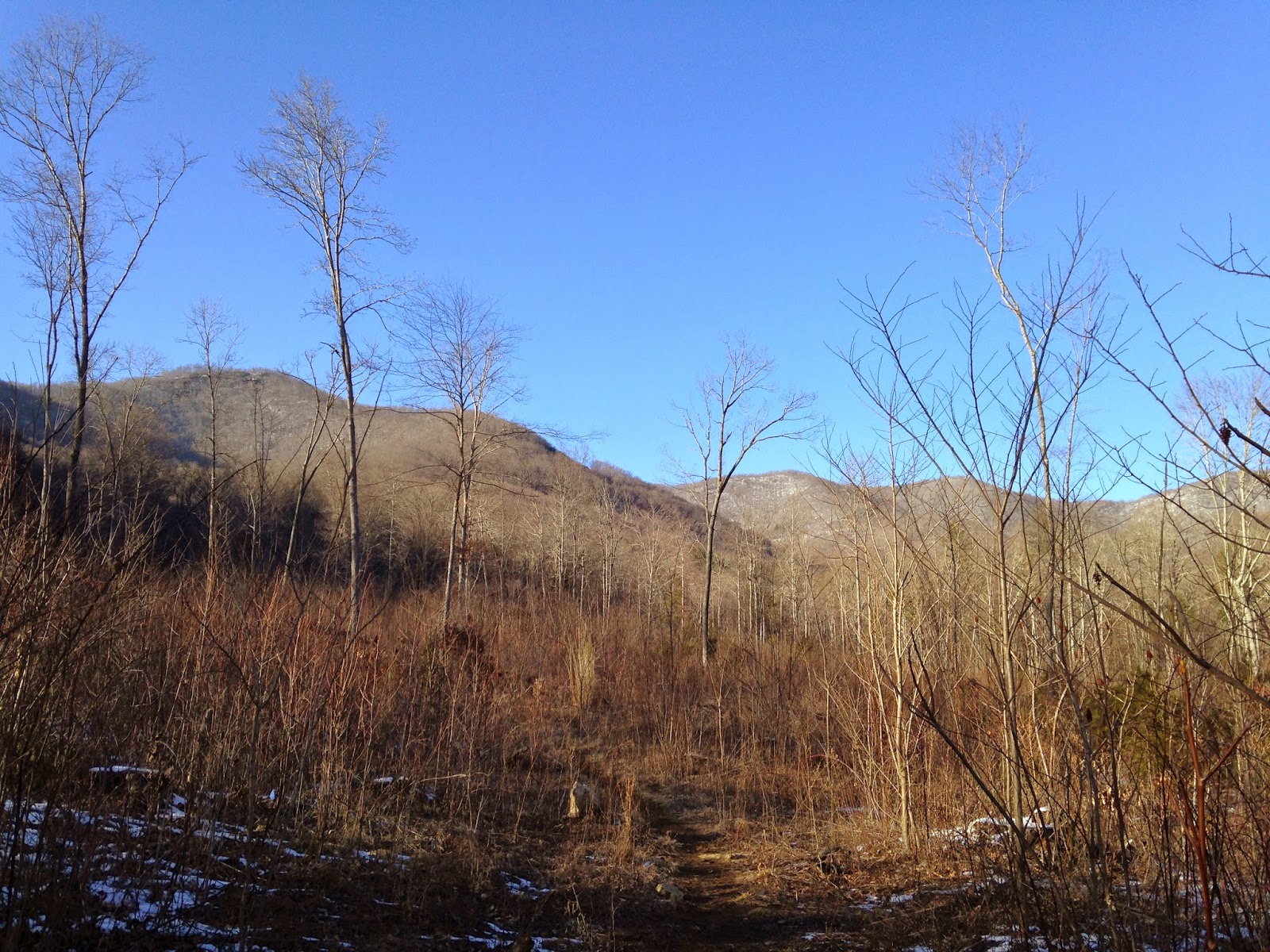 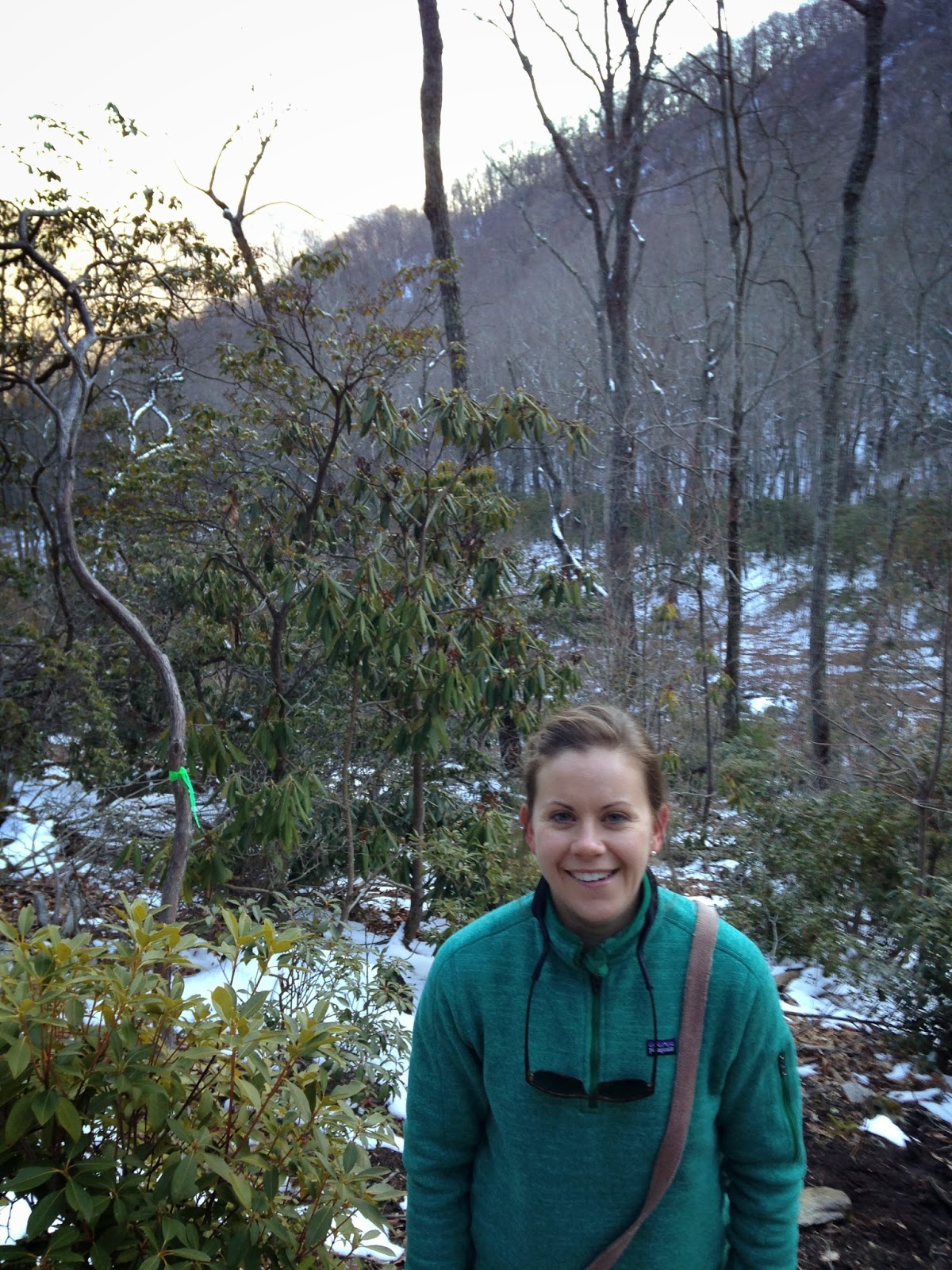 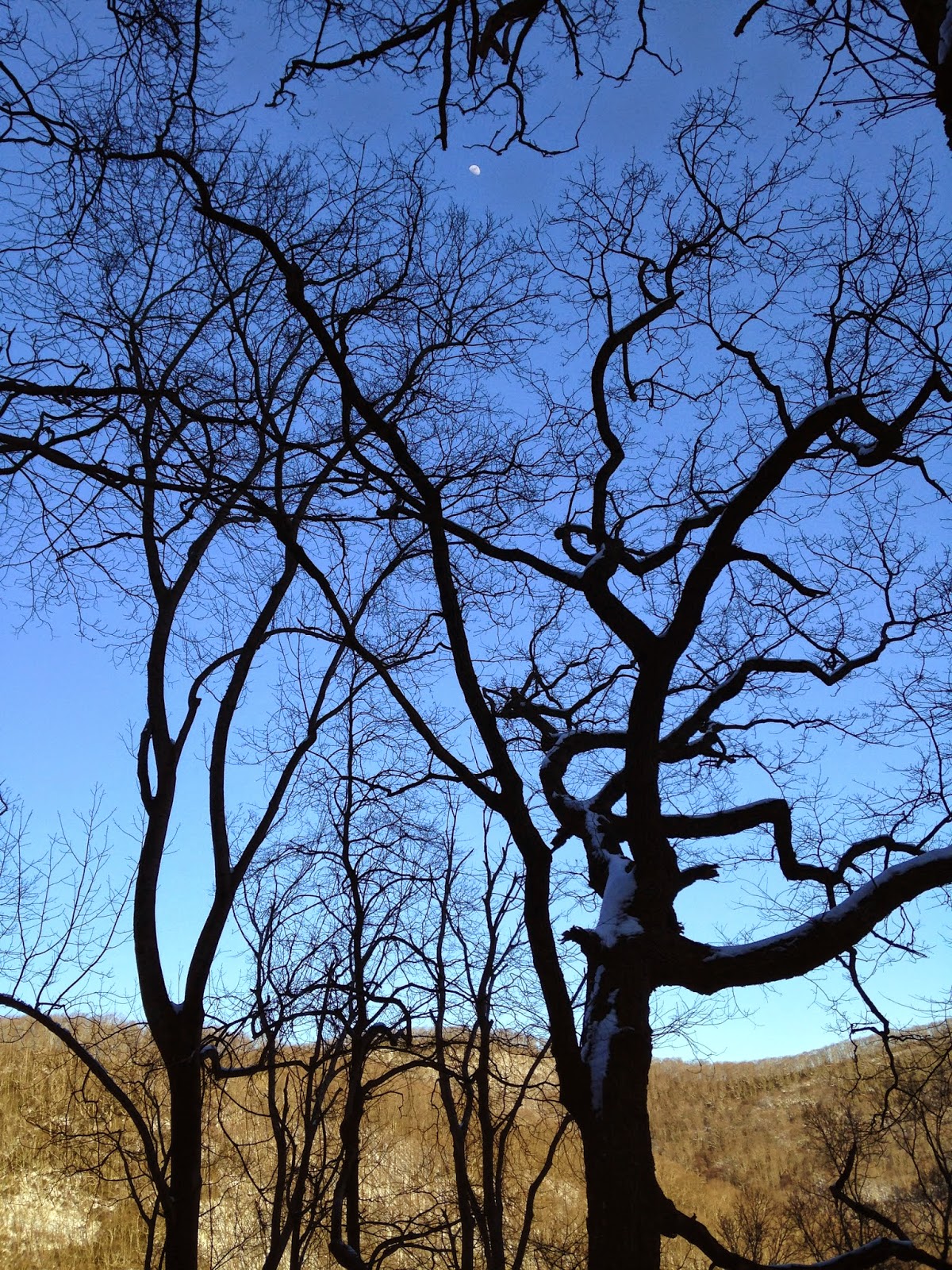 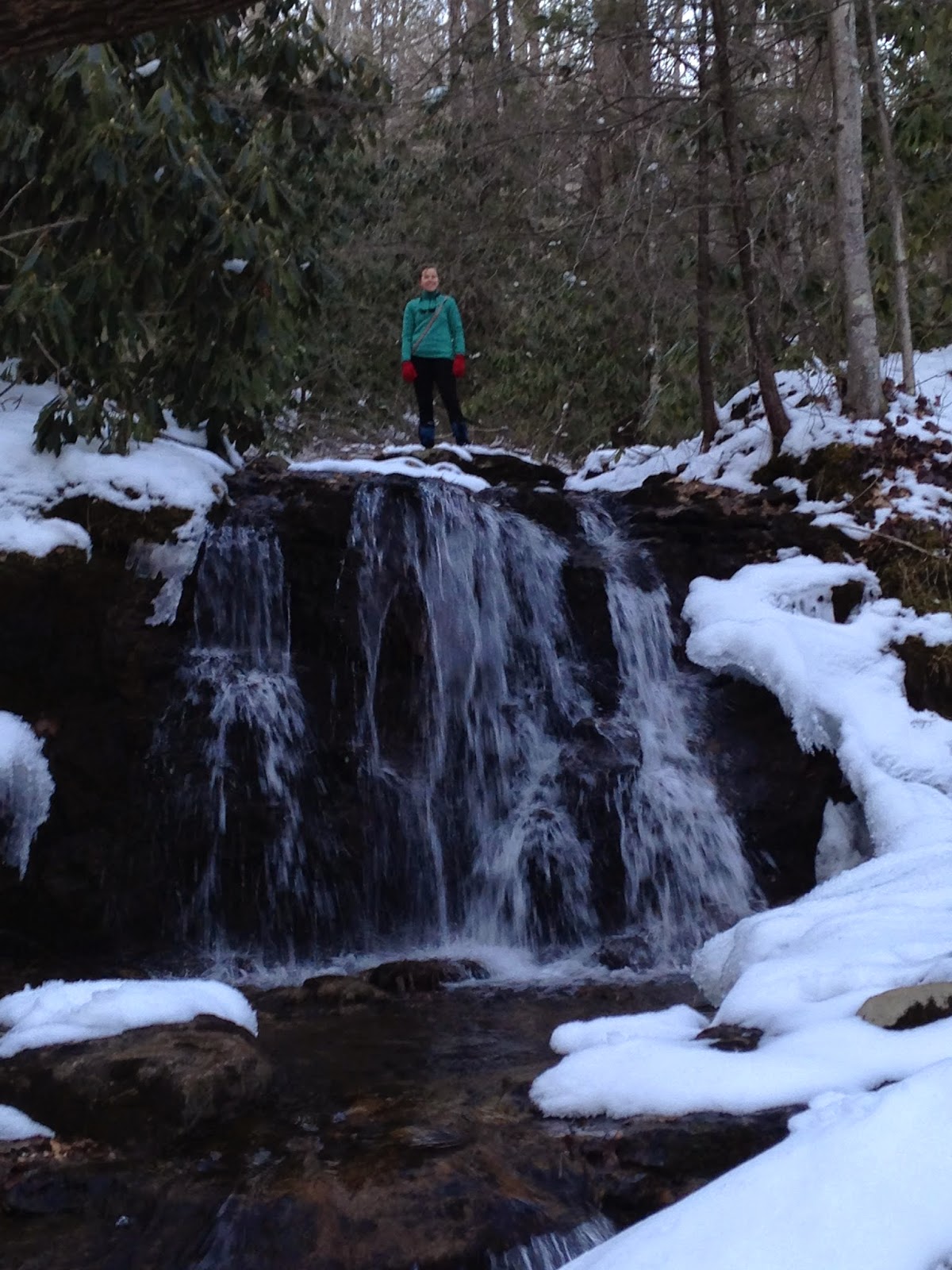 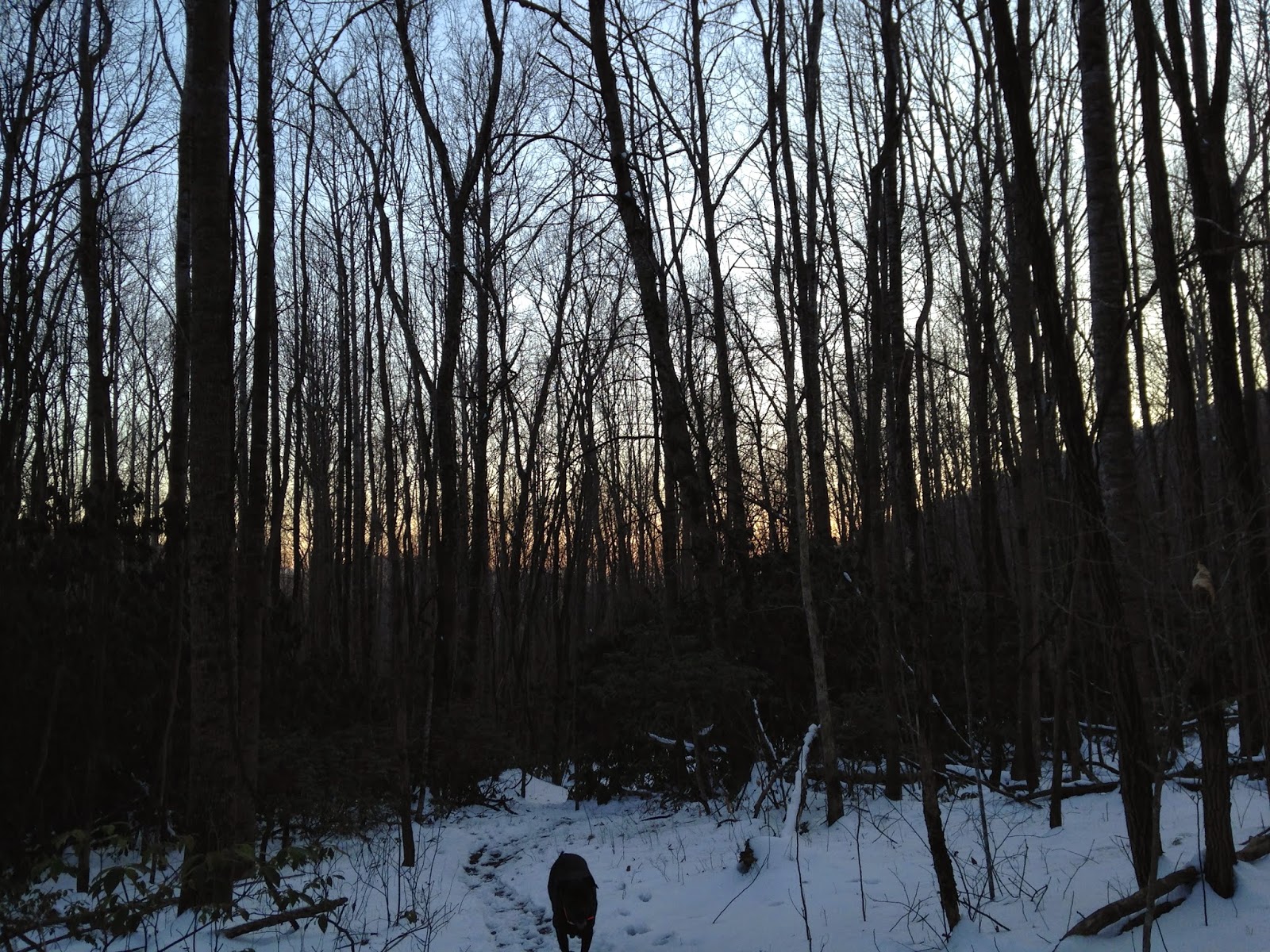 Up early to attend the North Buncombe Middle School Chilly Challenge 8k and Chili Cookoff. K.A.W had signed up to race with a team from her gym, LT's Primal Fitness. I tagged along to cheer her on and to hopefully score some free chili. When we got to the race a we discovered a member of her team couldn't make it and it was suggested that I run in his stead. Free chili was promised so of course I was in. This was actually pretty cool since I could help pace with K.A.W and also since getting back on my trail running game, I was interested to see how I stacked up against some real live runners. The course was fairly flat and mostly on pavement. My hips and knees didn't like that so I kept to the shoulder of the course to run in the dirt and grass most of the way. K,A,W was crushing it and kept a solid pace through the the entire course passing folks smoothly and working her way up the pack.


With the last mile left all uphill we quickened the pace and passed a few more folks that were slowing down. Once through the finish line it was to the snack table for me and free chili. At the chili judging they announced winners and K.A.W was surprised to see that she had won second place in her age group. She scored some free socks and a new PR on her 8k time. Beast mode... Super proud of her. 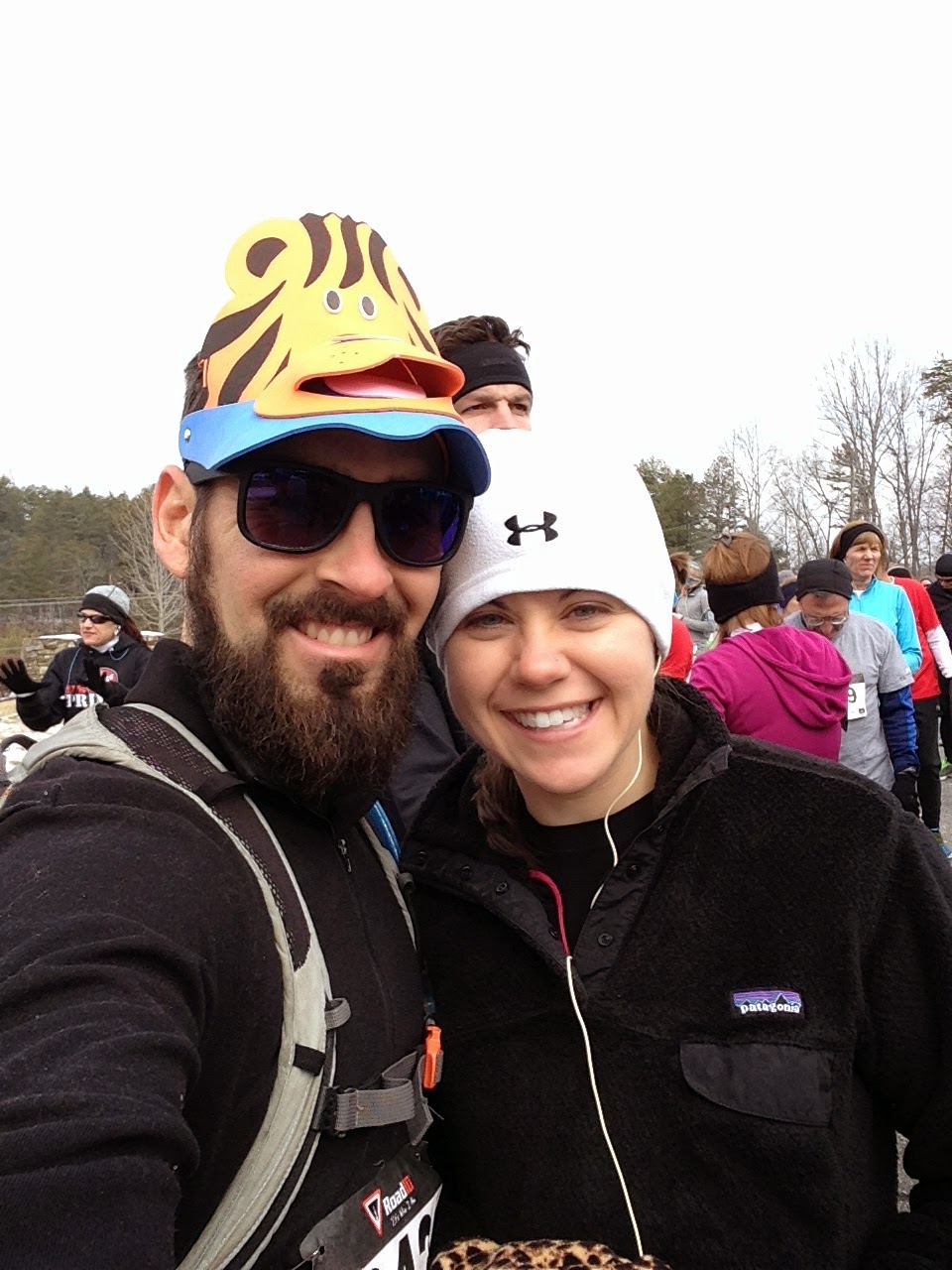 Later that afternoon we were sitting around Greenview when we got a text from Durhamite, mountain biker, and recent shredder of Farlow Gap, Mike P. He was in town and wanted to go on a mountain adventure. Loaded the packs once again, beered up, and we all headed up to Middle Prong Wilderness in search some good mountain vibes. 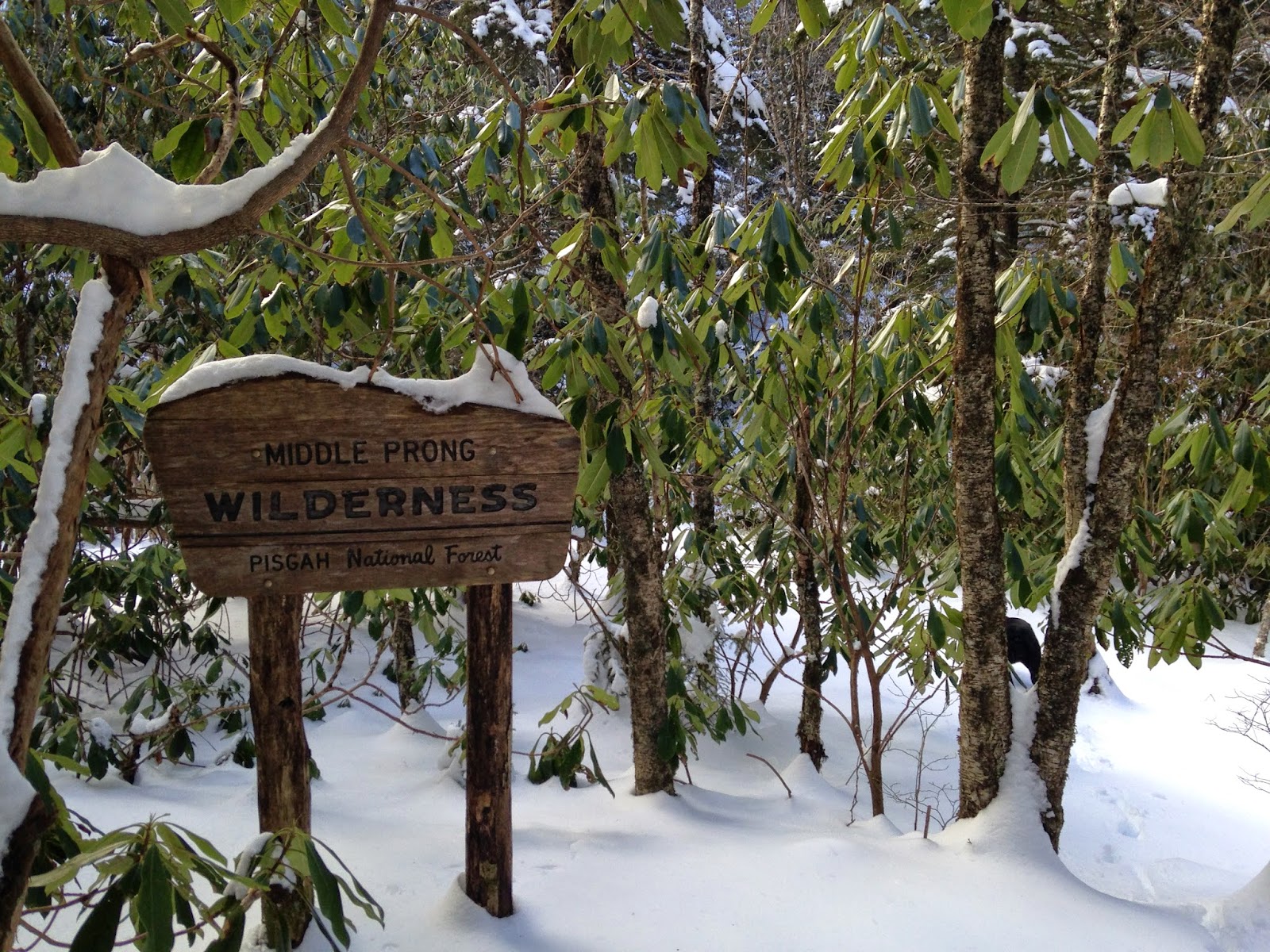 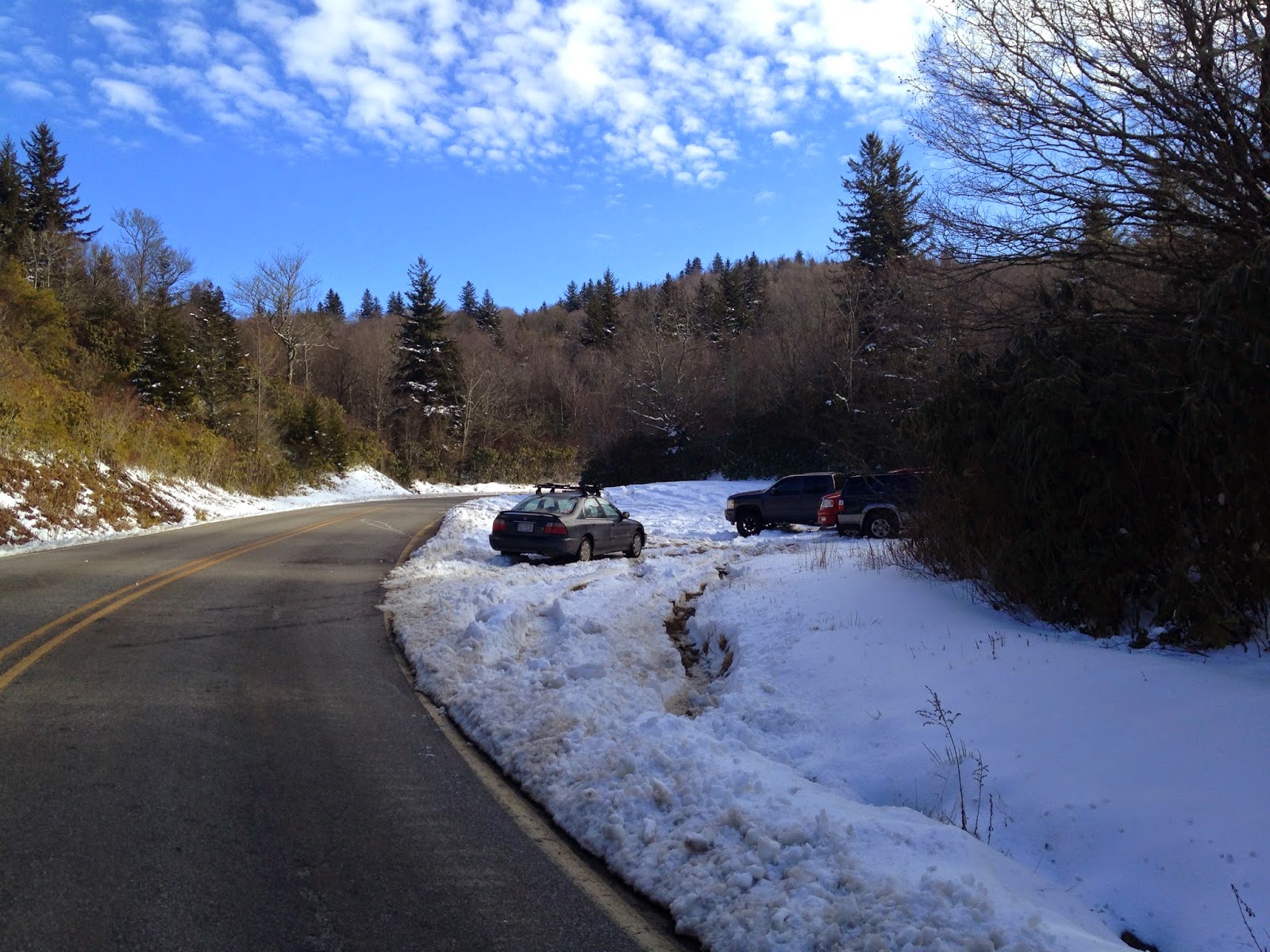 Once there we headed down the MST toward a bald I knew of a ways off. Middle Prong is fairly remote and it was no surprise that we were the first to venture down that section since the snows earlier in the week, Post holing through ten to twelve inches of snow is no easy thing to do. Mike P had not come equipped for this level of adventure but he followed along stoked to be outside. After what seemed like forever we made it the bald within five minutes of sunset. I don't know how that timing worked out... Just seemed like it was meant to be. We were rewarded for our efforts by one of the most beautiful sunsets I have ever been fortunate enough to see.... Words cant describe. 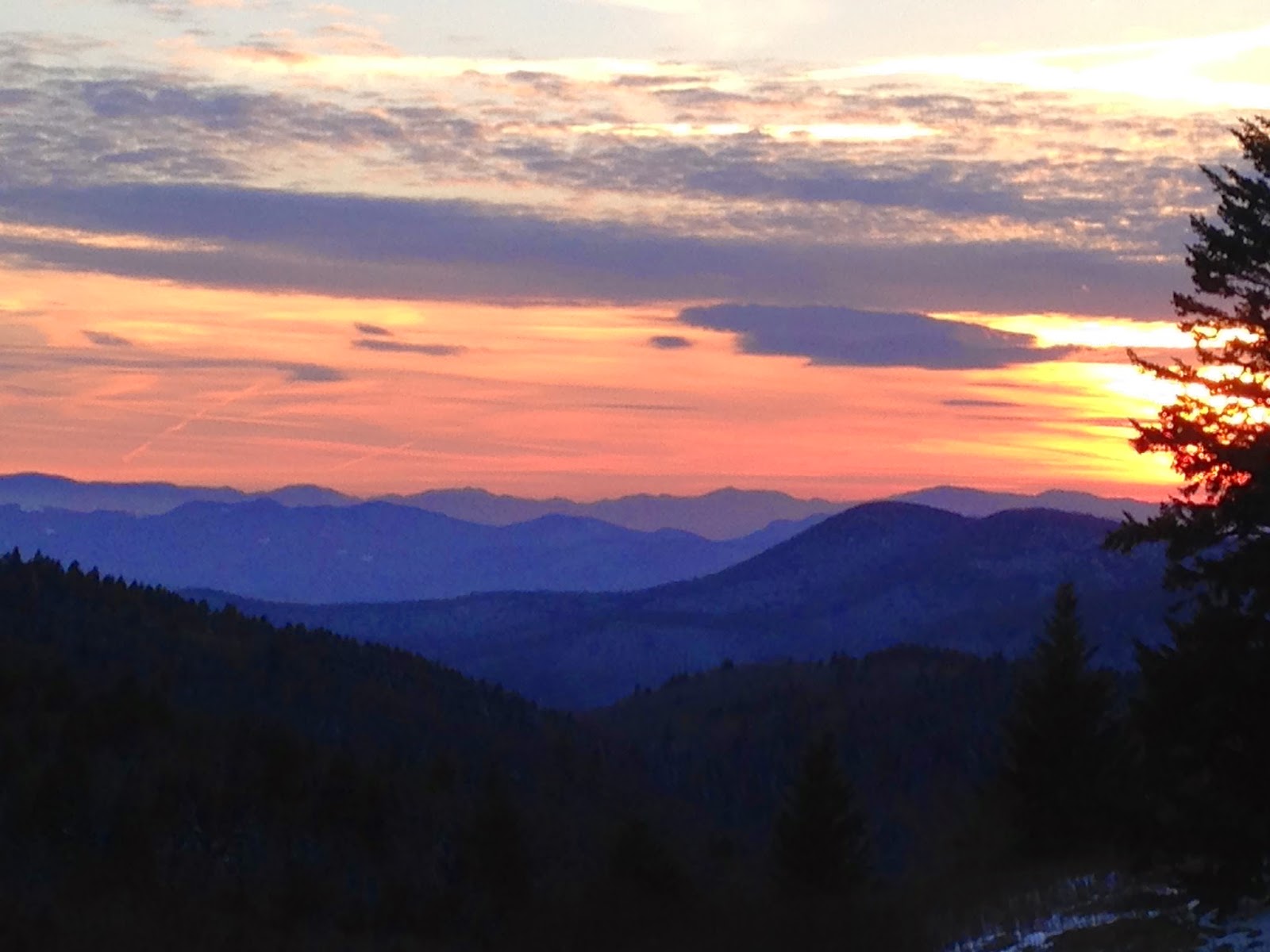 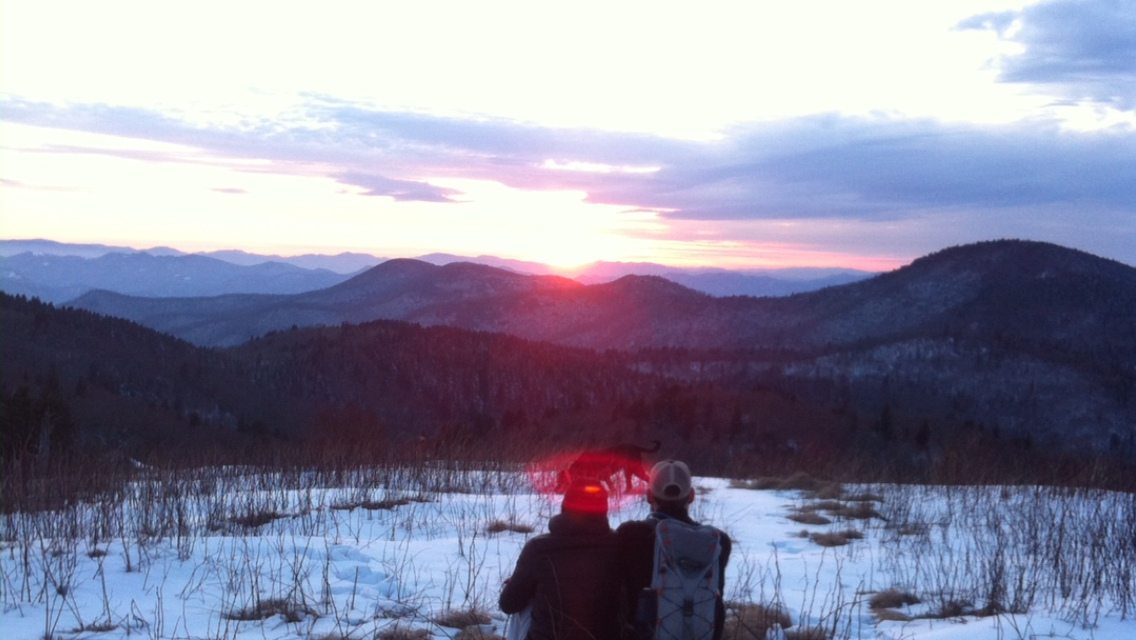 After a bite to eat and soaking in of the mountain vibes we headed back to the car. It was getting really dark so we turned on the headlamps and hiked the 4 miles back to the car by headlamp. 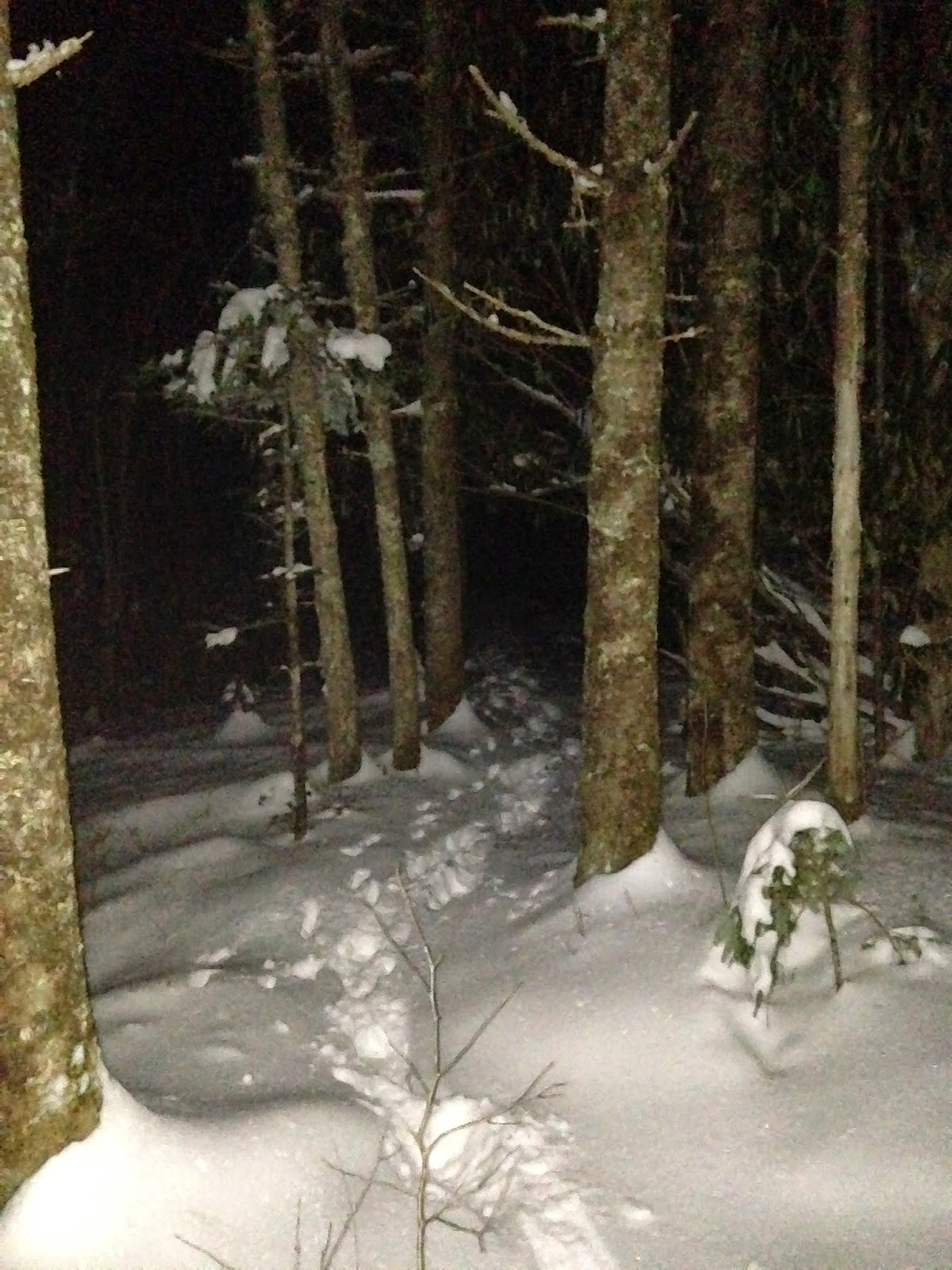 Hiking at night in the wilderness is always strange but doing it in deep snow, following our own footprints back to the car, made it extra surreal.Thankfully Mike P had fun because that was quite a bold "quick hike" for one to do so late in the day. But he's always up for some radness in the mountains and surely will be back soon.

Not much going on. Got a call from E-Dub about a possible mountaincycle ride in the N. Mills and headed over. I didn't want to make the same mistake as last time I tried to ride after a storm. I took my fishing gear just in case. After some confusion on where to meet I found E. and weighed our options. From the looks of FR 1206 it looked bleak.


He had spoken with some hikers  who said that Trace Ridge was still under many inches of ice and snow and so we decided to bail. Neither one of us wanted to slog it up the trail just to be plowing through ice on the way down. E headed to work and I headed to fish. Not much was biting on the river and after an hour and a half I headed home. Still not a bad way to spend a Sunday morning. 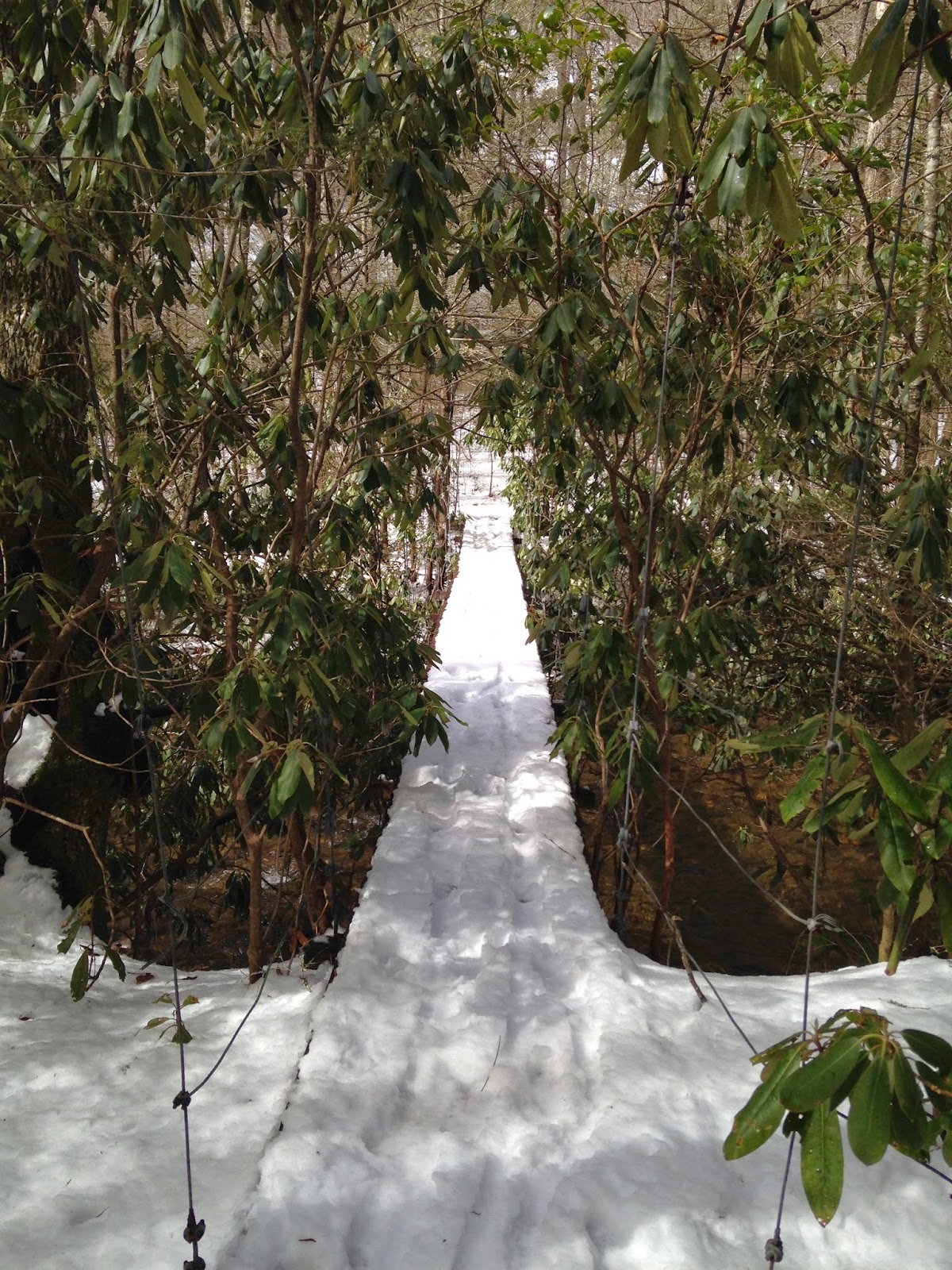 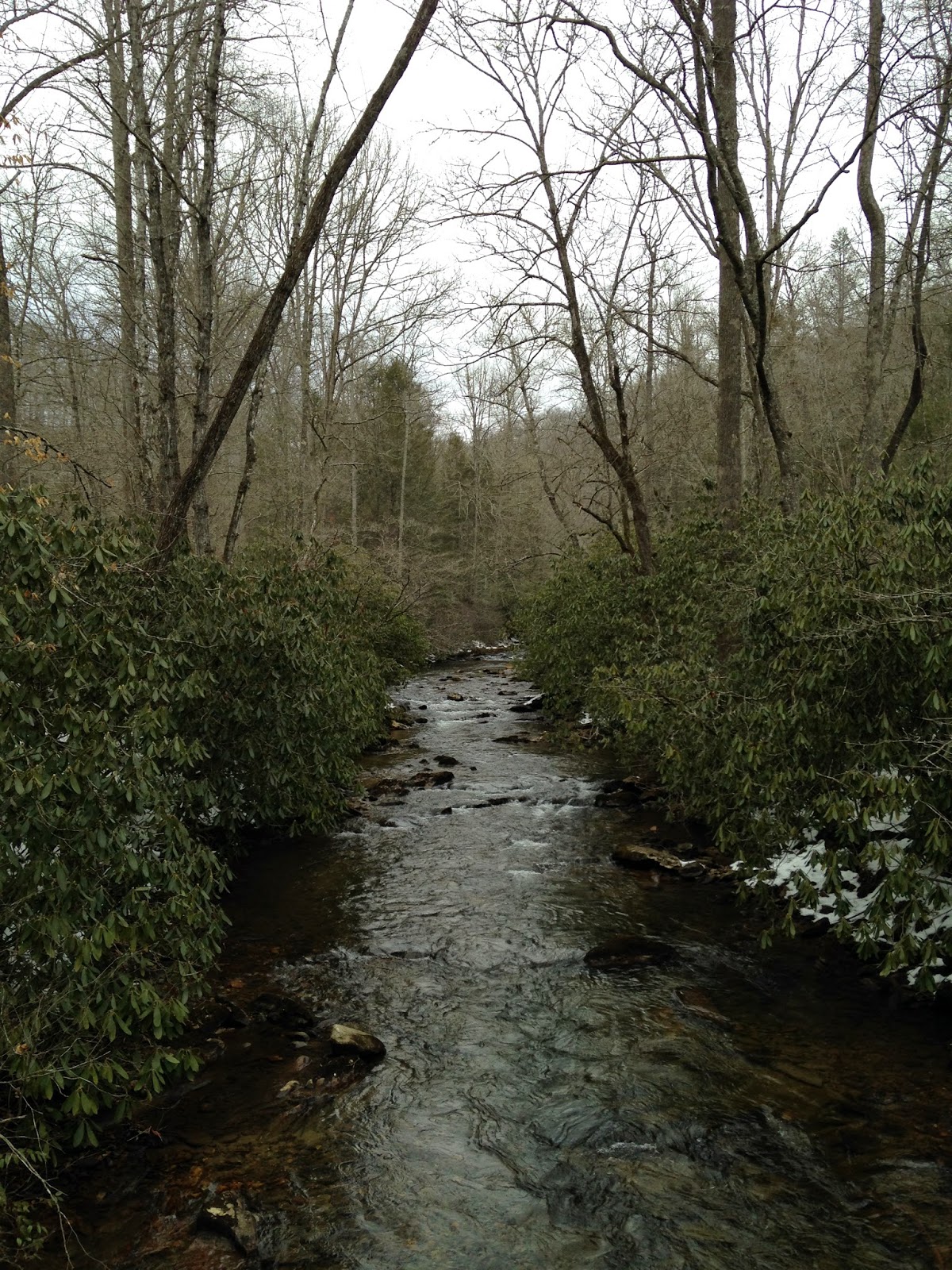 On the way home I got a text from Swannanoa Luke who need assistance with some bike work. I got home changed and rode the gnarcrossgravel bike over to Luke's house to assist in some tubeless tire set up on his mountaincycle. We had a beer, setup his tires, and discussed future radventures out in Pisgah and beyond. Like me, Luke is beyond ready for the warmer days off Spring. I haven't been on a proper bikecycle ride in what seems like an eternity and I fear that I will soon go mad. I hoped that running would fix my longing to ride a bike but it seems that it doesn't cut both mentally and on the physical side. The ten mile round trip to Luke's house convinced me that I need to get on the bikecycle soon and often. Just a few short months to race season and I feel behind the eight ball.

That was the way it went down folks. Hope ya'lls weekend was excellent and filled with great memories. Just a few short days until the next one...

Have a great week.