As previously mentioned, Wednesday nights are set aside to get rad at Col. Francis Beatty Community Park in Matthews, NC. Last night was no different aside from the fact that it was my last "Official" Wednesday night group ride. It seemed fitting that I go out with temperatures in the mid-90's and the trail as sandy as ever due to recent rains. Beatty has always been my go to trail and riding it the last "official" time in less than ideal conditions just felt right...

We had a great turnout too. All the cool kids were there and even a few non-regulars who just stopped by to say their good byes. 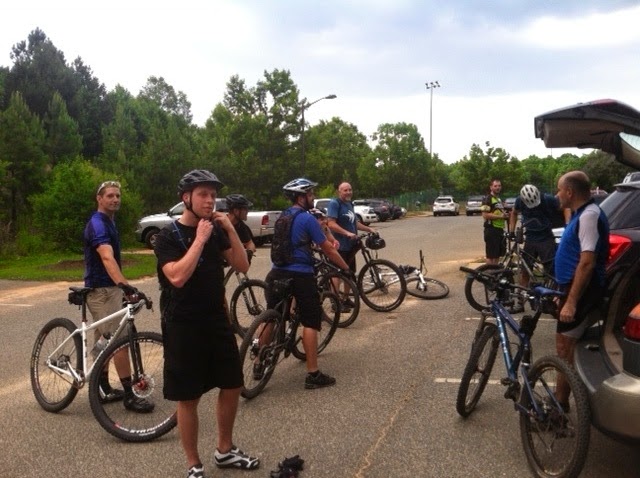 I have been fairly active with the local mountain Bike-cycle club the Tarheel TrailBlazers for quite a number of years. I've made some great friends and they will surely be missed. On the bright side, most of them also like those far shining mountains too so I'm sure our couch and spare room floor will be inundated with dirtbag mountain bike-cyclers every weekend from now to who knows.

Since it was the last time I'd be riding ole' Col. Beatty for a good while, I pulled Charlene Darling out of retirement. Charlene weighs a stout 32lbs and with 6"+ of fully suspended travel she aint the quickest bike in the bunch. However, I doubt I'll ever bring her back down to ride the Charlotte trails again so I suffered through it.

We hammered out lap 1 and stopped at some newly minted trail work to grab a few pictures... 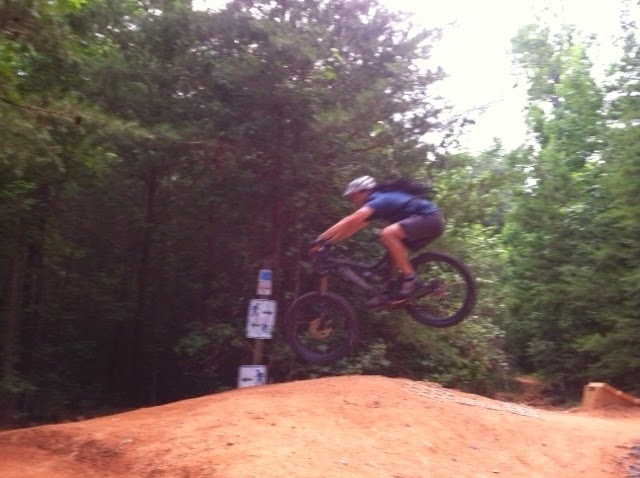 The skies started to darken toward the end of lap 1 and a decision was made to wait it out. During the waiting period, the group decided that before the next lap I should chug a beer. Peer pressure won out and I proceeded to slam a 7% APV Hop Drop and Roll IPA In about 1.5 seconds. After pedaling my ass off on a 32lb freeride bike for 6 miles, the beer hit me like a dump truck full of hops. It was awesome!

W set off on lap 2 at a less than "social" pace thanks to Tom Tom leading the pack. I was pretty sure I was going to see that beer again sometime soon. But!....it liked its new home in my gut and actually made lap 2 pretty interesting. Nothing like hitting jumps, drops, and technical rooty climbs with a luke warm IPA sloshing around inside of you.


After we finished another decision was made to consume more "fancy" beers over at Duckworth's Taphouse in yuppie-WASPville, USA aka Ballantyne. I would not normally associate with "those" people but I was promised good beers so off I went.

We ended up having the whole patio to ourselves. Stories were told and retold, much merriment and mirth ensued, and many beers were drank

I will surely miss these people and this town but hey...its not like Im moving to China right...?