*Endergo is an acceptable alternative.

I raced bikes for very short periods of time but it took all damn day. Enduro racing. That pretty much sums up what went down in the booming metropolis of Old Fort, NC this past weekend.

Bikes was raced, beers was drunk, and rad was gotten all up and down the hills and dales of the lesser known portion of The Pisgah. "My side" of Pisgah to be exact. Remote, technical and fun as hell. For those of you unacquainted with Enduro Mountaincycle Racing here is a terrible attempt at explaining:

Enduro: Riding casually to somewhere where your then timed to see how fast  you can shred for about six or eight minutes, usually downhill, then slow down and proceed to the next place and repeat a few times. Do that all day and drink beers. 'bout 30 miles.

Show up late to Camp Grier and make it to registration. Come to find out that the second shuttle bus to the bottom of Rattlesnake wont leave for another hour and a half so I hang out, grab a beer and mosey around. Eventually I made it over to watch some of last year's footage with E. Dub and the rest of the Billy Goat Bikes Team. E and Pisgah ripper Charlie Roberts were setup to have a fantastic Enduro and the stoke level was pretty high among them. Showing up too late to catch the first bus up we gathered around and waited on the second shuttle wagon to arrive. 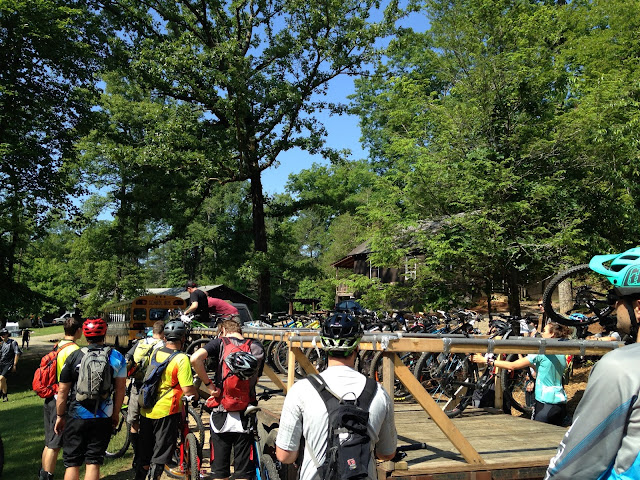 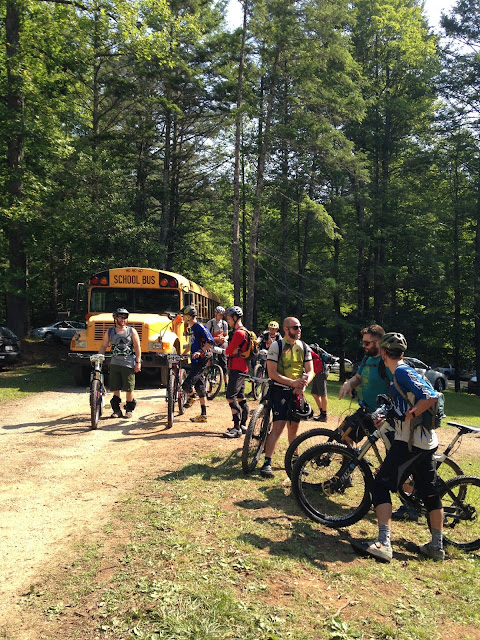 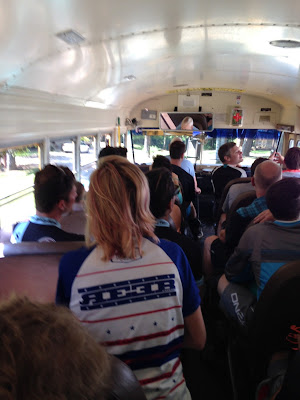 I found Swannanoa Luke and shot the shit with him during the ride. Up I-40 we went and soon we hit the bottom of Rattlesnake and started making our way up the Adventure Trail to the first stage. It was a pretty miserable climb being cold legged and having to grind up to road in the heat. We hit the top and lined up to start the first stage. Rattlesnake. 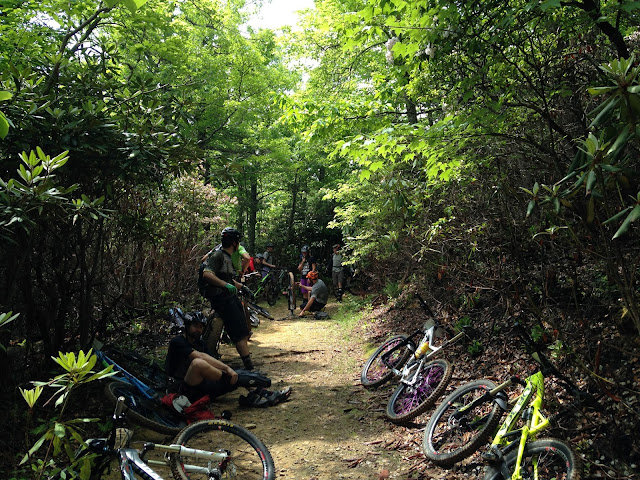 I know Rattlesnake well but recon had come in that the recent forest fire had caused some issues up top and the trail had some new, sketchy water bars scattered about. Luke an I lined up together and decided I should try to follow him down. He knows the trails in that area pretty well and being that I was on a hardtail and he had five inches of full suspension he would be faster anyway.

We squared up to the starting line and Luke takes off. I give him a few seconds lead and sprint like hell trying to catch him. Wham! five seconds in I get a mud glob square to the left eye. I do my best to swipe it away while trying to keep Luke in my limited sight. Eyes clear when we hit the hard left onto Rattlesnake. Immediately the trail turns steeply down and into a rocky chute. This is my type of trail and I make up a little time on Luke when we hit the smoother lower section. Berm after berm and rocky flat mixed in. I catch up just enough to keep Luke in sight and we cross the pavement into to the lower section. I damn near come off the bike once but hang on and cross the finish gate a couple seconds behind.

I knew going into the race that riding a hardtail in a race where only the downhills count for time was not the best idea if I wanted to do well. I realized this instantly at the bottom of Rattlesnake. "Oh well I'm just here to have a good time" I told Luke. The Billy Goat Team came in soon after me and we all headed onto Kitsuma and the next stage. 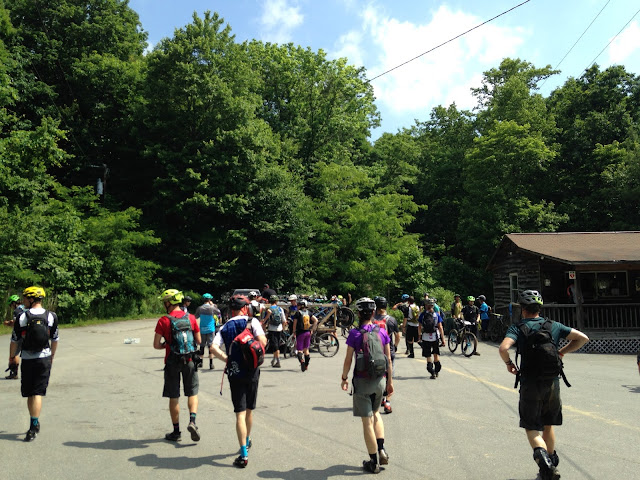 Up the forty six or so switchbacks on Kitsuma and we were soon on the trail rolling pretty good. The Billy Goat Team and myself were rolling the first downhill on the way to the starting line. Everyone was doing there best to get a good feel of the trail and things were moving a little too quick. E. Dub gets loose and all four of us end in a pile up with me front flipping over the hillside trying to avoid smashing into Charlie. We recoup and bikes and bones were good to go as we headed to the start gate for Stage 2.

Kitsuma is a bad mothertruckin' trail. Its fast and smooth and narrow and awesome. Make one mistake at speed on Kitsuma and you will surely find yourself forty feet down the hillside, waded up like a biscuit wrapper. We make the start gate and I drink the only beer I had on course with me. Sierra Nevada Torpedo Extra IPA. It was like rocket fuel. My turn was up and I was sprinting to the start gate, charging into the flat section to start the stage. I pedal as hard as I can go, waiting for the first downhill to start. I hit a left and immediately into a rock strewn set of off camber switchbacks. The trail is coming pretty quick and the bike is bouncing off of everything like a pinball. Rocks, braking bumps, and roots hammering the wheels. I get the bike under me and start to pump through most of it. Luke had a 10 second lead on me and I could hear his brakes and chain slapping ahead. We hit the bottom section and into the red clay. Loose and slick as owl shit. I hit a root and save the front wheel from trying to slide almost face planting into the rhodo. I sprint to the end and through the gate.

No crashes and a fairly clean run. Not terribly fast but OK. We hit the pavement and toward stage 3 on Star Gap. Over the train tracks and up the hike-a-bike toward the top. I opt to ride as many of the switch backs as I can but try not to waste energy for when I need it. Star gap is nothing but a laurel choked goat trail with nasty switchbacks that give way and disappear around corners leaving you wondering where to turn. Its pretty awesome but not a trail I ride often enough to know well. 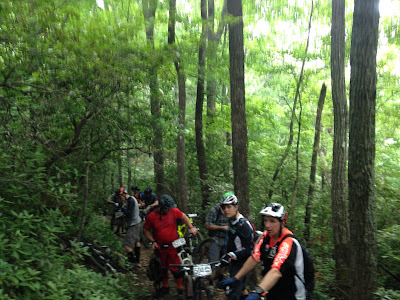 The Billy Goat Team had opted to save energy and so Luke and I were up first. He was having a great day so I figured him going first was working, why mess it up? Off he goes and me right on his wheel. I was going to do my best to rope him in and soon I was on him heading into the steep. I railed a hard right corner and felt the bike break loose. I saw the rear tire come beside me and somehow wrangled it in and kept upright. Down the way I could hear Luke a switchback ahead. I caught him at the bottom and I hit the straight to Jarret Creek Rd on his wheel. A log in the trail snuck up on us and Luke slid out going over it and fell a good way down the hill. "Go Go Go!" He started yelling at me so cleared the log and onto Jarret Creek Rd sprinting as hard as I could. Down the first couple turns and into the finish gate. Luke came in soon after and we grinded the gravel to the final stage.

We used the long stretch of gravel on the way to stage 4 to get used to the loose turns that only a gravel road can give. Sketchy and when your hauling ass you drift at the whims of the gravel. Wheels have a way of just giving out and I had the thought in my head of a recent gravel crash that left me with pretty tore up. Hauling ass on gravel is mostly out of control but in control all together at once. We make the start and let a few female racers go ahead while we relax. I opt to go first this run and soon I'm out of the gate with my legs aching and lungs bursting. The entirety of stage four is on gravel and I feel pretty good. All the gravel grinding this winter helped me get a feel for the loose descending and corners and I was making fairly good time. I kept both wheels planted and made it through the finish gate in tact.

Luke came in a few seconds back and we hit the pavement and tooled it on back to Camp and ice cold beers.

Day one had me sitting 41st or so out of 100 racers. I was ok with that. Hardtails are meant to climb well, not Enduro race so I was pretty stoked to have beaten at least a few dudes on big bikes.

The real test will be Pisgah Enduro Day 2: